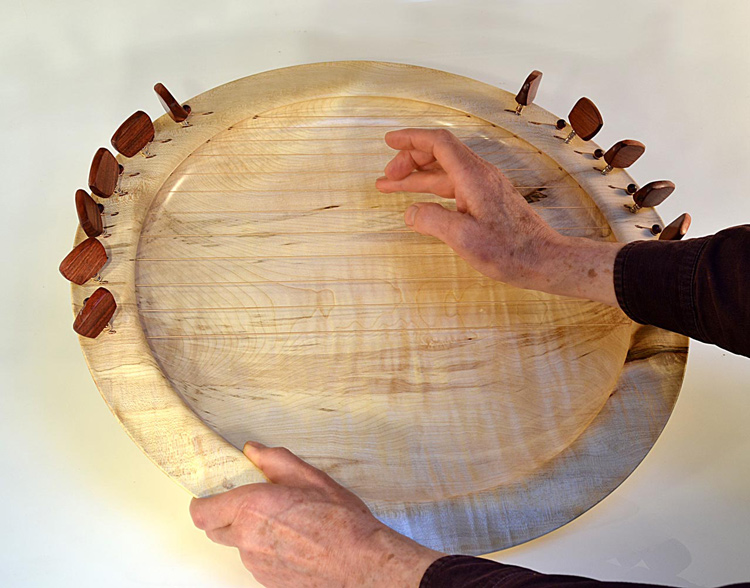 All Sounding Bowls come with a chart showing a wide variety of tunings. If you are unfamiliar with different scales, notes and tunings read on from here.

Pentatonic scales: Many cultures from the far past right up to the present day have used pentatonic tunings: Balinese on their rich and complex instruments, North and South American natives on simple flutes, Hebridean Islanders, and African tribesman have all used, and many still today use pentatonic scales. The gift of the Hebridean pentatonic is that it is without dissonance or discord. The semitones that so easily sound painful in the other tunings are not present. The black notes on the piano if played without the white notes, form a Hebridean pentatonic scale. More popularly the series d,e,g,a,b, is used. The Balinese pentatonic, byt contrast includes semitones. b,c,e,f,g, shows these intervals. Some prefer this more complex scale with it’s hint of mystery and sadness. The Japanese place their semitone one step later using b,c,e,f#,g, quite a different feel. Many Sounding Bowls are supplied in the Hebridean pentatonic tuning so that anybody can enjoy playing without fear of discordant sounds. Experience soon builds in this easy scale to allow lilting music like Gaelic airs and laments or bouncy tunes like Hungarian folk songs to be played.

Diatonic scales use black and white notes. The classical scales, like keys A to G are all diatonic. They are commonly referred to as ‘do re mi’ scales, or the Major-minor system. The pattern of semitones does not alter from one key to the next. They are still today the most common musical scale. Any sounding Bowl with eight or more strings can be supplied in a diatonic scale.

Modal scales were the Elizabethan approach to diatonic tunings. Each mode has a different pattern of semitones. Sounding Bowls in modal tunings each have a particular mood. The gentle, harmonious mood of the Aeolian mode is popular on the 15 string Sounding Bowl. A 12 string bowl I made in the Phrygian mode has a very open, limitless, almost lonely mood to it.

Bilateral tunings refer to the any Sounding Bowl in which the strings are radiating out. Lyre Bowls and Bridging Bowls are two such examples. These are tuned with the highest notes on the outer, shorter strings and the deeper notes progressing in from there.  Normally this is alternating from side to side like an African thumb piano.

Bilaterla tunings can also be used to create pentatonics on larger Lyre Bowls with a further possibility of pitching each string in the pair slightly ‘apart’ one note about 20% above the other. This enriches each note and creates beats, like on the Balinese Gamelan. Add to this the semitones of the Balinese scale and you have a sound that is rich and strange, awakening a feel of cultural experiences outside of the western social paradigm.

Musical notation can show how high or low a note is, as well as which note is called. Capital letters are used to show notes from middle C downwards and small letters notes above. Once outside the central two octaves an apostrophe is added. Thus d’ is eight notes above middle C, and G’ is eleven notes below. Octaves further out gain an extra apostrophe each.

Pitch defines exactly how high or low the whole tuning is kept. Two instruments tuned to the same scale at different locations need to agree, if they are to be played together. Tuning forks and electronic tuning aids that assist this are available at different pitches. Modern concert pitch is A=440hz and upward. Baroque pitch varied but is generally set at A=415 to 432.  Verdi greatly favoured 432 which is sometimes now called The Verdi Pitch.  There is mounting evidence that this pitch is actually in tune with organic processes and greatly aids in the healing that music can offer. Sounding bowls are supplied tuned to 432 unless otherwise requested. The tuners I supply are adjustable to maintain that.

The sound of two notes together is called an interval. This applies when they are played one after the other or together. There are twelve possible intervals in the western scales and modes. Typically an interval describes the space between the key note of the scale and the other ones. Thus the first interval is not really an interval, referring only to the key note. The second is a full tone as from C to D whereas the minor third is one full and one half tone as from C to Eb and the major third is two full tones, C – E.

Meditating on an interval can reveal to you the inner nature of that space as you relate to it. Some people have asked me for a guide to these spaces which so far I have been reluctant to do as describing something as subtle as this can condition your experience. However it is also true that if one does not know where to look one can miss the moonrise so I am offering a few hints here while also saying that every such experience is a relationship with a truth rather than a truth immutable.

The full octave is sometimes compared with raising oneself to ones full potential. It is the same note as the key note yet not the same, vibrating at exactly twice the frequency. A string tuned to any note will vibrate in sympathy if the octave below or above is played. Within this interval one might experience oneself as enclosed, complete, without further needs.

The seventh is one semitone below the octave. e.g. C – B. this interval shatters the container of the octave, opening out limitless possibilities. One might experience this as pain at losing the cosy self or as the beginning of a path or as being suspended in a starry sky, lights from all sides.

When heard as a rise from the sixth it creates a sense of waiting, an abeyance of completion, a seeking, yearning for the octave.

The sixth is perhaps more like standing on a hilltop, or tall tower, strength beneath one, massive view, some hint of ownership or achievement. Try this one rising from the fifth or descending from the seventh.

The fifth is the second most natural interval after the octave, it is what you get if you compare the note from half a string with that from a string damped at the 1/3rd point. It has has a sense of preparation, an opening to potential, gently held like a flower, beautiful, complete, but impermanent, on its way to something else.

The fourth interval is, perhaps like the cube, very grounded, solid, awakening to the easy simplicity of life that always in the end turns out to be more involved than we thought we wanted.

The third seems a little childlike, simple sunshine in the major and flowing tears in the minor. This is of course simplistic yet the outward confidence of the major third is in uncomplicated contrast to the inward looking painfulness of the minor, and like a child’s tears the progress into happiness again is a push that seems to resolve everything.

The interval called second can like all the others be seen in various ways and appears differently according to the mood we approach it from. As a first step in the octave it feels exactly like that, like a foot put forward with intent and direction, approached from the minor third it appears more like a comforting ground after being at sea emotionally.

I find these intervals great fun to play with. Each one in itself is deepening and expanding in my relation to inner exploration. Played together they can create or become a journey. In other articles I describe particular journeys that those with more insight than I have lead me on. Here I would like to mention playing with these together with others. If one enters a meditative state sitting with a friend and holds a note while the friend holds another to create a chosen interval the space between the two people can become very rich and alive indeed and while some intervals may be comforting some may challenge certain types of friendship and not feel good. Intimate friends might enjoy exploring the feelings around singing or toning the two notes into each others mouth so that the interval is felt in the vocal chords themselves.