How a Theatre Workshop/Performance Donated £500 to Sounding Bowls

“The Money“ is a Kaleider performance that examines how people make decisions.

Real money is on the table and the players must decide what to do with it – Unanimously!
The shocker is announced only at the start, not before:

“You may not donate it to charity.”

Tobias was not expecting to propose making a Sounding Bowl with the money but during the process the idea of how to increase the value of the pot ($560Australian dollars and £235UK pounds, much of it carried over from performances in Sydney) AND then give the proceeds to a worthy cause occurred suddenly. See minute 24 in the video linked here.
The idea was questioned in various ways, see minute 30 or minute 47 for example but slowly became popular. Unanimous, signed agreement was needed though!
One popular idea was to give the money to a random individual. The proposer wanted to make this an unknown homeless female. This idea was liked but never got close to unanimous support.
On several occasions people from the audience paid to join the discussion, increasing the value of the pot but ‘throwing a spanner into’ the process. Near the end one joiner suggested we deliberately allow it to roll over to the next performance (later that same night) as they might have a viable idea. (they showed they did not, their pot was ‘rolled over’)
Right at the end one joiner suggested giving it to a man in the audience because he seemed a good listener and had a nice beard! This same individual then suggested that he could not sign any agreement because his lawyer was not present!
When it was (somewhat forcefully) pointed out that refusing to sign guaranteed a roll-over he delighted the crowd by dallying with the seconds and signing in the very last few.
Tobias was really surprised and deeply delighted by the support this difficult process was able to show for Sounding Bowls. It is a real proof of the value that Sounding Bowls are bringing to the world that a group of around 20 people who had never met before could agree in such a short time to give such a contentious amount of money to support Sounding Bowls.

> We are not employing, (buying only the work-time of the makers) but instead are setting people up as makers, providing them with a workshop-space, fully equipped to support their skills until they are ready to set up their own workshops and their own careers. We place no time limit on that support.

> Though what we make is art we are not supplying the art market with its inherent risk of pandering to riches, instead we are supplying musicians whose work is to heal. In place of adorning the world our work becomes part of a structure of care that lifts human experience from its depths into new chances of development.

Grateful for this immense gift of trust Tobias is now committed to supporting one of the makers trained by/ or in training with him to make a 7 string Sounding Bowl to give as a gift to a music therapy charity or CIC that is working either with children with special needs or with dementia.

Suggestions please via the email at top of page.

Watch all or part of the performance here 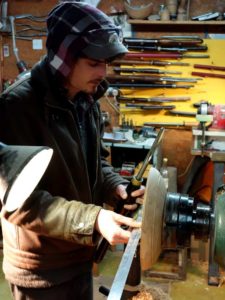 Wilfred making a start on ‘The Money’ Sounding Bowl.

Choosing a part-formed piece Ashburton Cherry from our settling room where it has been seasoning since 2010 Will is setting up, reshaping, marking out and sanding the bowl that is to be donated into a caring situation. 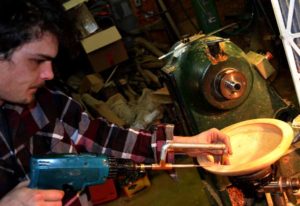 Here Wilfred is drilling the holes that will take the copper tubes through which each string runs at both ends. The copper acts as a ‘nut’ as luthiers call it, bending the string and transferring the tension from the tuning peg into the vibrating /sounding part of the string.

BBC Spotlight, the regional news program sent the wonderfully able John Danks out to interview Tobias at the Studio. John arranged all his own camera work, his lighting and his sound while managing the interview and the flow. Following the this John came with Tobias and Robin Andrews, polymath, musician and teacher to St Andrews care home in Ashburton where he covered some of the reactions to and enjoyment of playing Sounding Bowls.

I was allowed to set up my own camera to catch part of John’s interview so you can now watch more of it here: 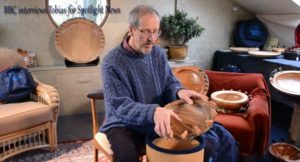 The reaction has been wonderful. We have well over a dozen applications to receive the bowl and will have to sort carefully through which one can make the best use of it. Some of the applicants, such as the WESC foundation already have a Sounding Bowl and are making wonderful use of it. They may be able to expand the work they do with another. Others have not yet got one and may be able to break new ground if they did, so there is much to consider.

There is still time for further applications so if you know of someone who could make wonderful use of a little Sounding Bowl like this one get in touch now, details top left of your screen. We would love to hear from you.

We hope to have this piece completed and donated by the end of January and will keep this page updated.

Meanwhile book a workshop with Tobias and discover the joy within.

Music therapy is SO much more than just listening. The science in this article is…

A Deep Ecology of Making